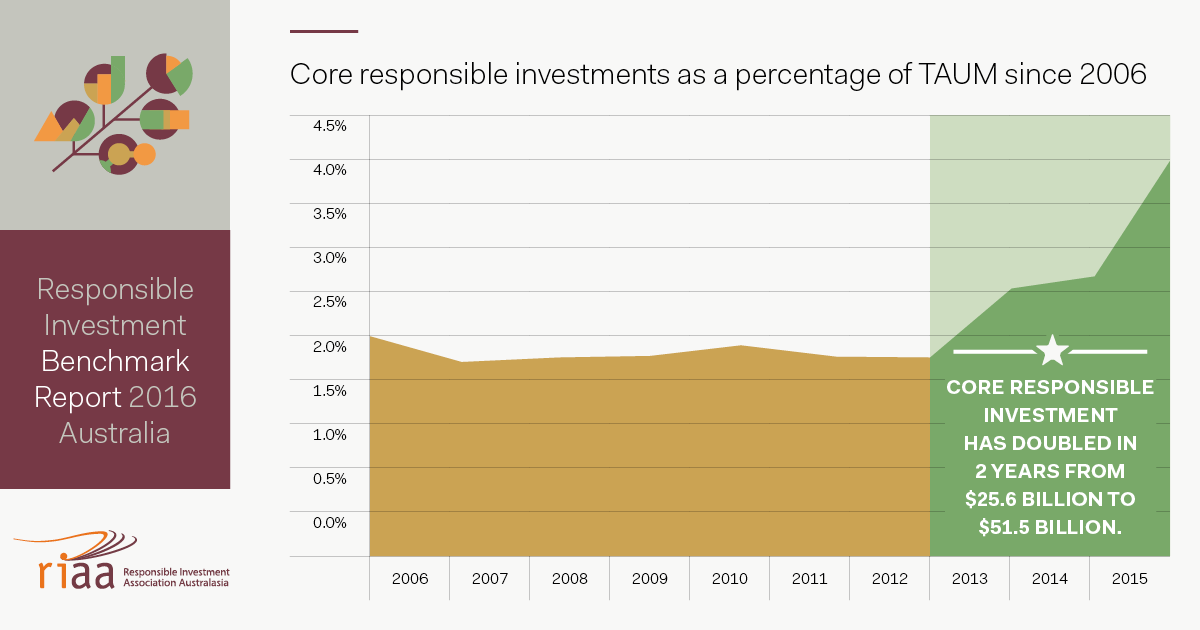 “It’s hard to miss the significant step-up in the way the finance community has taken a much more responsible, ethical ownership approach to the assets and companies that they’re invested in,” says Simon O’Connor, CEO of RIAA.

Where the shift has happened:

“In the last year and a half or so there have been some really active conversations and debates about divestment… especially around fossil fuels and climate risk,” says O’Connor.

“This year for example, in the States, there’s been a record number of climate change resolutions. We’ve seen near-unanimous support for climate change disclosure resolutions of companies including BP, Shell, and Rio Tinto. And there’s even been some support from the old laggards such as the Exxon’s and the Chevron’s of the world – although not quite majority support from them!

“We’ve also seen that a high-profile case around Transfield – now known as Broadspectrum – where there have been some very visible examples to divest or avoid that particular company for asset owners who are concerned about human rights.

“Probably the less visible process has been tobacco divestment, which continues to be a wave that’s flowing through our superannuation fund industry. We’ve seen to date about 35 super companies divest from tobacco, most of those over the last year or two.

“Corporate engagement has been another big step… There’s been a much broader appetite for investors to engage very actively in the companies they’re involved with. And we’ve seen some really strong outcomes – whether it’s improvements in disclosure about carbon in the Big-4 banks, change in regulatory environments about payday lending, big consumer goods companies about labour-force supply chains, and of course gender diversity on boards.

“Investors are using more of the tools available to them in terms of an active ownership approach.”

The shift from divestment to positive investment:

“The flipside of divestment of course is investment – so you can remove investments, but there are also some investors supporting and investing in industries that demonstrate good strong commercial and financial incentives, as well as social and environmental outcomes.

“One of the biggest drivers that has cemented responsible investment to taking-up a significant portion of the finance and investment sector is that ESG [Environmental, Social and Governance] matters.

“There’s an understanding that ESG does impact on valuations, and that you can’t be a good investor these days without looking at ESG-factors and how they’re impacting on the companies and sectors they’re investing in. We’re reminded of this on a frequent basis with issues such as the VW emissions scandal wiping over 20% off the share pricein a matter of a few days. And, when you see things like a Peabody Energy losing 95% of their share price in a year.

“To really understand the full story of what’s going on, [money managers] must have an understanding, grasp, and deep research on the ESG side of things… There’s a compelling correlation between companies who exhibit strong ESG-management and performance, with strong financial performance. I think this mounting body of evidence has underpinned the very large uptake of responsible investment.”

The rise of the conscious-consumer – it’s about time:

“The second big driver here that’s very interesting, and has only emerged in the last year or two, is the demand side – the consumer driver. There’s been a distinct shift in the last year building off quite a low base, but there’s a significant uptake of consumer interest in the way Australians are interested in how their money is invested and banked – whether through financial advisers, superannuation, banks, or general investments.

“Super funds are hearing it from their investors, advisers are being asked about it by their clients, and certainly the banks are also hearing that from their members as well.

“The rise of the conscientious consumer – one that asks questions about how they’re money is invested, and that demands their money is invested without doing harm – in many ways has been a long time coming for finance. Most other industries over the last decade have felt the impact of this, and it’s shifted entire industries. Think of Nike’s sweatshops, and how many garment manufacturers have had to change their supply chains – it’s gone through so many industries and it’s finally landed in finance-land. We can’t ignore it, and we’re going to need to respond to consumers on how we’re managing their money in a way that does no harm – and even better, in a way that does some good.

“This really is a long time coming, and it’s the early stages of what we’ll be able to celebrate over the next few years. The shift has absolutely been enabled by social media technologies, by the rise of Millennials, by the activist groups who all have the finance industry in their sights, demand for greater transparency portfolio disclosure, and so on.

“This is the 15th year that RIAA have been producing this report, and the stats in the report show how much the responsible sector has developed in the last 15 years.”

Findings of the 2016 RIAA Benchmark Report:

This was first published on Australian Ethical’s Blog – see here