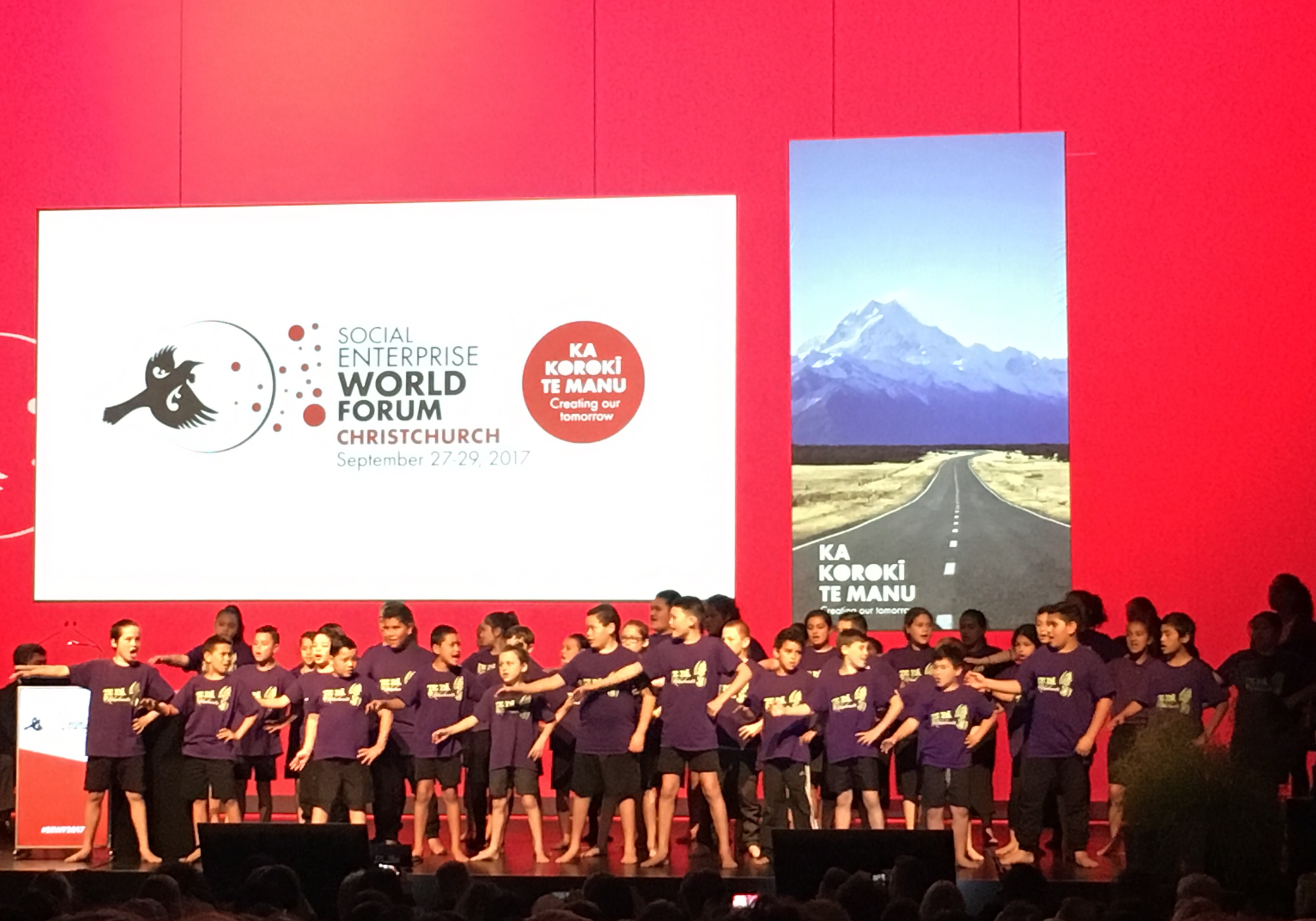 As part of our role supporting the development of the market for impact investing in Australia and New Zealand through RIAA’s Impact Investment Forum, we attended the Social Enterprise World Forum in Christchurch in September 2017.  RIAA’s Impact Investment Forum Program Manager Carly Hammond shares her experience and take-aways from the event.
Ka korokī te manu. Creating our tomorrow. This was the theme of the 9th Social Enterprise World Forum hosted this September in Christchurch, New Zealand.  It also bodes well as the mantra of broader developments in ‘Aotearoa’ to harness the power of business and finance for positive change.

The Social Enterprise World Forum is the annual global gathering for advancing the development of social enterprises.  As the role of business in creating a more prosperous society and environment gains traction, the Forum is attracting a wide audience from social enterprise practitioners and support bodies to foundations, trusts, private investors and government agencies.  Refreshingly agnostic to the often self-sabotaging debate around what defines a social enterprise, the Social Enterprise World Forum welcomes and celebrates all types of for-purpose businesses with an interest in delivering positive social, cultural and environmental outcomes.

This year in Christchurch, the Forum brought together over 1600 delegates from 45+ countries. This in itself would automatically generate a buzz. Add to that the embedded entrepreneurism and passion to harness business as a force for good, and the energy was a force to be reckoned with.

Emerging from the devastating earthquakes that struck the city and region in 2010 and 2011, there could hardly have been a more apt setting. Christchurch is a city rethinking what it means to be resilient in face of the physical, social and economic pressures, and is rebuilding itself accordingly.  In the words of the Mayor of Christchurch, Lianne Dalziel, ‘all the rules have been thrown out the window… we need to utilise our infrastructure for the long term even if we sacrifice returns in the short term’.

This long-term perspective and a desire to invest more sustainably is an consistent trend.  Last year, as revelations of KiwiSaver investments in tobacco and controversial weapons reached New Zealand consumers, Kiwis communicated loud and clear that they were not prepared to build their retirement savings at any cost.  The majority of NZ’s KiwiSaver providers have since made a big shift towards responsible investing, with the Responsible Investment Association Australasia’s Benchmark Report showing that negatively screened funds grew by over 2500% and reached a total of NZ$42.7 billion in 2016.

In the context of this increased appetite for responsible investment, coupled by a recognition that government funding and philanthropy alone can’t address all societal challenges, New Zealand is also turning its attention to impact investing.

Impact investments – investments made into organisations, projects or funds with the intention of generating measurable positive social and environmental outcomes alongside financial returns – have been around in New Zealand for a number of years.  The investments have often been in the form of social finance and loans to NGOs, community organisations, and low-income households from organisations including banks, foundations and community trusts.  More recently the Ākina Foundation, consistent with its mission to grow social enterprise, has supported various enterprises to attract impact investments in order to achieve greater scale and increase their impact, and recently launched an Impact Enterprise Fund. The New Zealand Government is making important strides into supporting the growth of social enterprises and its fledging Social Investment Agency has made an initial, if somewhat controversial, foray into the social impact bond space.

Since the NZ Government took a bold approach with equity crowd-funding regulations in 2014, crowd-funding platforms have played a notable role helping social businesses raise debt and equity capital.  As one example, the NZ natural cosmetics company Ethique conducted its second capital raise on the PledgeMe platform as the Social Enterprise World Forum was taking place, raising an inspiring NZ$500,000 within 22 hours from 275 ‘pledgers’.

However, as has been the experience in other more mature markets from the UK and USA to Japan and Australia, realising the potential of impact investing requires a dedicated, strategic approach to market building engaging very diverse sectors.

A new report launched at the World Forum, Growing Impact in New Zealand, makes the case for growing impact investing in New Zealand.  It outlines the country’s developments in the field to date, and lays out a roadmap for market development with a tripartite approach including developing infrastructure, facilitating a marketplace and building the pipeline of impact investment opportunities. The report, written by the Ākina Foundation with contributions from EY and JBWere, suggests that an impact investment market of around NZ$5 billion is achievable.

As Ākina’s report notes, having enough high-quality impact investing opportunities is vital for the field to thrive, and remains a challenge in most countries.  In the case of New Zealand, there lies exciting potential both with the sizeable, asset-rich charity sector and within the Māori economy.

While social enterprise is a relatively new concept, Māori have practised a similar approach for generations, with economic activity pursued as a means for achieving inter-generational community sustainability. There are a range of Māori structures and organisations with blended social and economic missions, from Māori land trusts, ‘marae’ (Māori meeting place) trusts, to the recently established ‘iwi’ (Māori tribe) organisations.

Many iwi (some of which who are still finalising settlements with the Crown) are notable economic entities in their own right, with significant asset bases and engaged in diverse commercial activities with the specific purpose of achieving intergenerational social, environmental, cultural and economic value creation for their people.  The opportunities for these bodies to harness private capital to achieve greater social outcomes would appear great, as is the potential for becoming impact investors themselves.

With 60 per cent of attendees at the World Forum hailing from New Zealand, it was hard to leave Christchurch without getting a sense of the country’s creativity and ingenuity, and desire for social innovation that benefits communities and the environment. From Patu Aotearoa, a Napier-based health and fitness provider established to help Māori become more physically active and build a sense of belonging, to the open source software Wellington cooperative Loomio which democratises decision-making, the applicability of for-purpose business seems limitless.

As new social enterprises emerge and some of the more developed enterprises look to impact investing to help deliver upon their mission, it’s exciting to play a role supporting the development of this sector in New Zealand through RIAA’s Impact Investment Forum.  ‘Creating our tomorrow’ has well and truly begun, and the future looks bright.